Mrs. Ida (Smith) Grayson was another prestigious member of York’s Black community in the early 1900’s. Mrs. Grayson has recently become notable for her relativity to the highly rated new movie “The Green Book”. Mrs. Grayson operated a boarding home in the early 1900’s named The Charlotte Hotel, located at 32 West Princess Street. This Boarding House was listed in several editions of the Green Book. The Green Book was a booklet much like what AAA would put out to advise travelers on this decision or that, relative to traveling. The significant thing about the Green Book was that it was a lifesaving booklet for African American travelers. It advised them on which locations were safe or not for Negroes, as we were called during that era. 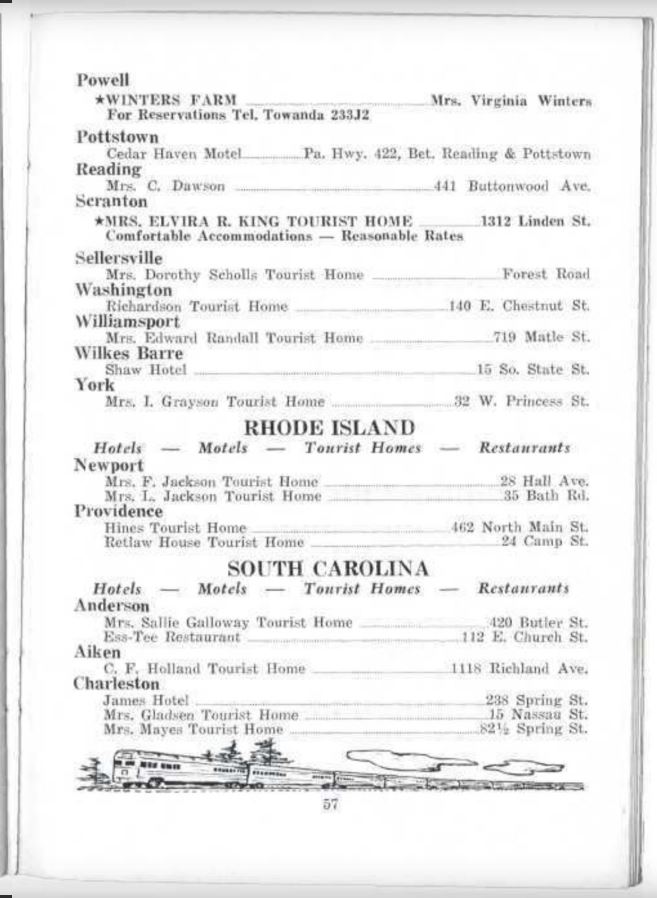 Mrs. Grayson was born in 1884, the Daughter of Mr. & Mrs. James & Adell A. Smith. She came to York with her family in 1893, from Norristown, Md. It is not a surprise that Mrs. Grayson’s establishment was listed as a safe haven for Negro travelers and others of that time. Her entire life was dedicated to uplifting and building her community. She was prominent in many local and state Negro organizations. Mrs. Grayson was a Charter member of the Phyllis Wheatley Literary Club.  She was a founder of the Emergency Girls Club and the Entre Nous Art club. Mrs. Grayson was a member and District organizer for the Pennsylvania State Federation of Colored Women’s club.

Mrs. Grayson was highly active in the Faith Presbyterian Church, a small but powerful and influential Black church whose members had broken off from the Historic First Presbyterian church. She served as a member, trustee and Sunday School teacher. The churches focus and mission was the uplift of York’s Black community. Other famous, faithful and influential members of that church included Dr. George Bowles and the Rev. Thomas Montouth, two of the founders of the Crispus Attucks Center.

The 2001 book “How Women Saved the City” by Daphne Spain, mentioned Mrs. Grayson’s Home for Girls, which her Grandson Byron told me was on West College Avenue

In April of 1934 Mrs. Grayson gave a major talk to the Women’s Missionary Society of Grace Lutheran church. Mrs. Grayson’s talk was on on Race Relations and Building a Better World. It was met with much praise and high emotions. Mrs. Grayson quoted from Dr. W.E.B. DuBois writing the Object of Segregation. She called the Negro problem in America the ‘greatest handicap’ to building a better world. She said “indifference and prejudice breeds ignorance. She opined that perhaps the churchwomen were not informed on the topic and so asked them to answer certain questions definitively and courageously. Do you judge the whole Negro Race by your experience with the Negro who works for you? Do you have any friends among the Negro race? Do you ever read books or magazines written by Negroes about Negroes? Do you realize the Negro is being given a Raw deal by the New deal? Do you know anything about the housing conditions of Negroes in your town? Is segregation practiced in the schools, churches, restaurants and other public places that you frequent? And what if anything are you doing to alleviate or eradicate these conditions? She closed the talk by requesting the women to plead with those they associate with to treat the Negro as  worthy citizens.

Her son Charles graduated from Millersville State Teachers College and Howard University in Washington D.C. known as the Black Harvard. Eventually he received a Masters Degree in Education from Penn State. Charles went on to a distinguished career as a school teacher and administrator. He taught and was acting Principal of the Smallwood School, one of York’s two segregated schools at the time. After schools desegregated as a result of the Brown versus the Board of Topeka, Kansas,  he became an administrator with the York City School District. In 1953, While still a Principal at Smallwood School, Charles was appointed by Governor John S. Fine as the first African American Alderman in York.

Mr. Grayson, like his Mother Ida, was very aware of the problems facing the Negro in this community and the country. And like his Mother he was not afraid to speak out against injustice. In 1950 he gave a speech at the Small Memorial A.M.E Zion church underscoring the need for change. Grayson challenged America by saying, “  Unless American capitalism narrows the wide gap between the conditions of the Negro today and the expectations of equality laid out by this country’s forefathers, the Negro will seek a solution to his problems in another system. Speaking on the persecution of Negro Icon Paul Robeson for his outspoken views, Grayson said, “Lift Paul Robeson’s comments out of the emotional context with which they have been surrounded and show me where his demands for complete spiritual, cultural and personal freedom is subversive”. Grayson went on to say, “Like the white man the Negro seeks Freedom and shares all the glorious hopes of the West”. “Today the Negro is rejected, the inhuman picture that whites carry in their minds, the continuous anti-Negro epithets on their lips, shut out the Negro as truly as if he were in a cage”. Grayson closed his talk by saying, “the members of both races must throw off their deep-rooted resistance to the presentation of the problem in all its hideous fullness if race relations are to be improved”. Mr. Grayson was speaking at the 27th annual banquet of the church’s trustees. He was introduced by Mr. Henry Hopewell, Principal of Smallwood School. Mrs. Joanna Harris was toastmistress and Rev. William Baker, pastor also spoke.

Mrs. Grayson died February 3, 1936 from a complication of diseases. Her funeral was held at Faith Presbyterian church with the Rev. Thomas Montouth presiding. Her interment was at the historic Mt. Pisgah cemetery in Wrightsville, Pa.

In May of 1945 businessman William C Smith, who died in 1940 left a bequest of money to the Martin Memorial Library to establish the Ida Smith Grayson Memorial Fund. The fund was to be used to purchase books and magazines featuring the development of the Colored Race written by members of the Colored Race